In order to do this review honestly, it’s important that I do try to focus on the best that the Gamo Whisper Fusion Pro Air has to offer, and I’m going to try, but there is a huge elephant in the room that really ought to be dealt with first. Normally, this would be a footnote to the review, a passing mention of something marginally unimportant, but the unfortunate naming scheme of the rifle makes it a little hard to ignore. So let’s get that out of the way first.

It’s Loud
Despite the “Whisper” in the name, this particular air rifle is very, very loud. Some people have reported that it’s as loud as their .22s, which can be pretty ear splitting. Don’t get me wrong, this isn’t a deal breaker by any stretch of the imagination, but quite a few people have felt that the name implies ‘quiet’ when it clearly isn’t, and this amounts to a social if not legal form of false advertising. Now that we know that it is not quiet, it is in fact loud, and we can discuss its other attributes which, actually, are pretty amazing.

Perhaps the best aspect of this rifle, and the one you’ll notice first out of the box, is that the factory scope is pretty amazing on it. It’s difficult to describe, but it’s solid, easy to mount, and really does give an accurate view of the field in front of you. It is arguably one of the finest factory scopes that you can get on a commercial rifle, which is saying a lot considering the options out there. It’s easy to mount, easy to adjust, and has great clarity.

Another aspect of this gun that I cannot fault it on is accuracy. One report has a shooter knocking the head out of a dime from 25 feet, then hitting the same hole again at 15-20 feet. Considering the scope and the power behind the rifle, I honestly don’t doubt it. There is a bit of a drop at the very end of the shot, but it’s pretty consistent and not that difficult to compensate for. After a few shots, it should become pretty natural.

One thing that is particularly impressive about this rifle, though, is that the accuracy remains consistent regardless of the ammo. Even trying a number of different types of pellet, it still fired pretty much the same, which isn’t always the case.

One thing that you will likely notice about this particular rifle is that all of the mechanisms are pretty stiff. Whether you’re breaking the rifle, cocking it, or even pulling the trigger, you’ll see that it requires quite a bit of strength in order to accomplish this. I’m not sure whether this is a point in its favor or not, and that may depend on your specific situation. If you have children in the house and are afraid that they’ll get a hold of your rifle and try to use it when you’re not around, this may be a really fantastic safety feature since they likely won’t have the strength to cock or fire. On the other hand, this could be incredibly annoying if you want to use it yourself and have to fight to just get a shot off. I wouldn’t call it prohibitively difficult, but it is something to be noted. 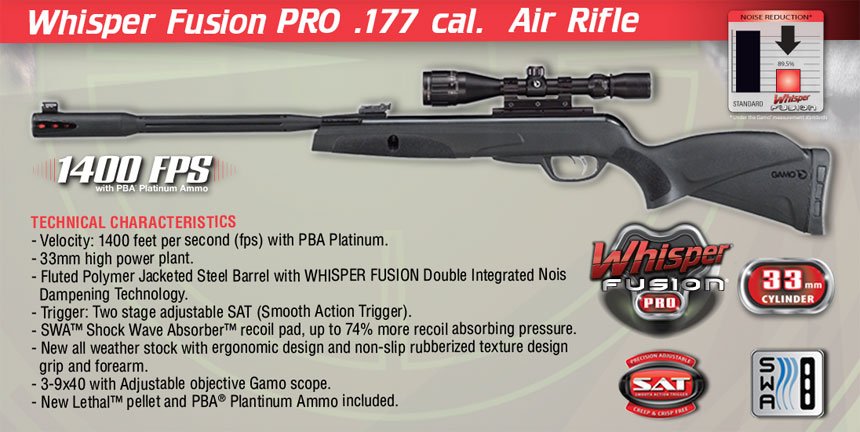 This is actually a really good rifle. Were it not for the name, most people would probably only mention the loudness in passing, and if that’s not something that concerns you, then it’s no big deal. If it is, you might want to consider the Gamo Whisper Fusion .177, which sounds a bit loud while firing, but is much quieter when you step back. Despite that it’s really accurate, has a great scope, and is very solidly built.

Tips to improve aim: The Gun, The Eye and the Hands

What is a PCP Air Rifle?