Recently, I?ve been getting a lot of fantastic feedback from all of you, and a question keeps getting asked over and over again: ?What would you suggest if I want a quiet air rifle?? Whether it?s because it makes hunting easier or just because they don?t want to bother the neighbors, many of you would like an air rifle that doesn?t sound like?well, like a firearm.

Perhaps the most well-known and well-advertised of the ?quiet? air rifles, the Gamo Whisper Silent Cat is designed to keep the sound down while you?re out shooting. A fairly standard .177 with skeleton stock, this little beauty is capable of shooting up to 1200 feet per second with PBA ammo.

What makes it so quiet is the noise dampener attached to the front which can reduce sound by up to 52%. While that does make a difference, it can still be loud with the PBA ammo since you?re approaching the sound barrier. Physics will always be a problem, so get used to that. If sound is that much of an issue, consider firing lead pellets instead, which will drop the flight speed to about 1000 fps, putting you further away from supersonic.

Either way, even with lead pellets and the noise dampener on the front, this gun is still incredibly accurate. The scope it comes with is a little difficult to focus, but once focused the locking ring is excellent. The construction is lightweight, but everything is solid and you won?t feel like you?re shooting with something cheap.

If you?re not too interested in the Gamo for any reason, you might want to take a look at the Stoeger X20S Suppressor Air Rifle. This is a solid alternative to the Gamo which in some cases actually gives better results.

The way that it suppresses noise is through an innovative two-stage suppressor design which not only uses standard dampening baffles like most suppressed rifles, but also an internal air-regulator ring that helps channel the airflow into insulation, keeping the noise down.

The biggest problem with this gun is that the breech is very, very tight and it can be hard to get a pellet to sit right in it. Other people have suggested using a Dremel to bore out the breech more, but I?ve found that just working with it and firing the rifle enough will widen the breech so that your pellets will start to sit properly. It?s annoying and you’ll waste some ammo that gets deformed when loading it shaves the rear edge off, but it?s not a huge deal.

Otherwise, the accuracy on this rifle is top notch. I?ve had no problems putting half a dozen pellets inside a quarter from 40 yards away. It?s quieter than any of my non-suppressed rifles and sits well in my hand. Generally very pleased with the trigger, even if the break is a touch too tight. This is probably a good rifle for a beginner to intermediate shooter who would like to limit the sound for one reason or another.

What will attract a lot of people to this rifle is that it?s the most ?classically? designed of them so far, but it?s also a high quality product which is much quieter than the majority of other rifles you?re likely to encounter.

The silencing technology on this particular weapon is a baffled shroud around the barrel which redirects the air to reduce the sound of firing. While not as effective as the Stoeger, it is incredibly good for a spring pistol rifle. Part of that is because while the baffle is pretty standard, the power plant parts are fitted with very tight tolerances which result in a far more muffled report.

The rifle itself is excellent. It took me about 150 pellets to really break it in, but once that was done I was shooting within a half an inch at 40 yards using a number of different pellets. In fact, I was surprised by how many different pellets seem to work well in this particular one, giving you a wide range of shooting options.

It?s a little heavy, clocking in over 10 pounds with a quality scope, but well worth it for target shooting. Between that and the fact that you can?t reset the safety without cocking the gun, I wouldn?t take it hunting, but it?s great for a fun afternoon of field shooting.

Part of what makes the Benjamin Trail NP2 so quiet is that it?s ?nitro piston? system is just naturally quieter than a spring piston. Fewer metal parts moving against one another plus a smoother motion means that you?re going to end up with a quieter weapon, and that?s what you have with the Trail NP2.

The trigger was a bit tight coming out of the box, but a few adjustments and it was just the way that I liked it. This is one of the crispest triggers I have ever had immediately after picking it up, and while you could probably find something technically better, you shouldn?t have much of a problem with this one.

The barrel shroud does an excellent job of keeping the sound to a minimum. As with the above, it?s not going to be perfect, but this is definitely a lot quieter than most comparable rifles. I?ve seen complaints online about the shroud coming loose during cocking, but I just don?t see it. You can remove it for better access to clean the barrel, but as long as you?re not twisting the barrel when you cock the rifle, you should have no problems with the shroud coming loose.

Otherwise, this is one of the better rifles I?ve fired.

Regular readers will not be surprised that the number one on this list is my beloved Benjamin Marauder. Hate to be predictable, but there?s a reason I keep coming back to this beauty.

First of all, by the very nature of it being a pre-charged pneumatic, it?s just going to be quieter than most other air guns. The power behind the pellet is discharged air and doesn?t rely on complex piston designs in order to make them fly.

The barrel is shrouded for resonance dampening as well, further reducing the noise level so that, while it?s not quite a whisper, you?re unlikely to find a quieter gun that also gets the same power and accuracy.

That?s probably the biggest advantage of the Marauder: it balances conflicting elements nicely. Most of the ways to reduce sound also have an effect on accuracy, so the quieter it gets, the less you?ll be able to shoot properly. The Marauder sits right at that sweet spot where you can get the maximum noise suppression while still being able to put quarter inch groupings into a target at 25 yards.

Again, not a surprise, but if you want one of the quietest, most accurate air rifles on the market, you can?t do better than the Benjamin Marauder. It?s great for target shooting and hunting, reliable, and very nearly as quiet as it gets without sacrificing accuracy. 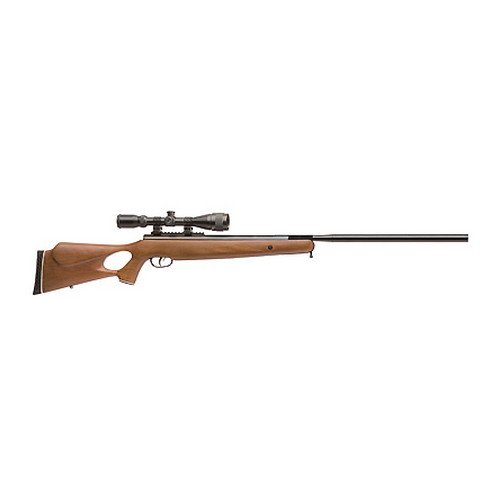