>>Click Here To See The Best Price For The Crosman Nitro Venom .22 Air Rifle On Amazon.com<<

This is a really good gun. There are a lot of ways to say that, and I’m going to spend several paragraphs saying it in much wordier terms, but that’s what this whole review is going to boil down to.? So if you’re itching to buy something new, your best bet is to go and order this one now, then come back here and be happy about what you just got.

Right Out of the Box

As soon as you take this thing out, you’re going to be happy with it. It doesn’t have a whole lot of weight to it, but I actually found that kind of refreshing. Instead, it feels like it’s just enough gun to get the job done.

Before you get going, you’ll want to clean this one well. On one hand, it’s nice that they bothered to make sure it was well lubricated before going in the box, on the other hand the dieseling that you get if you don’t take the time to do this is annoying and potentially harmful to the gun. Don’t risk it.

Once you get this rifle out to where you want to shoot it, you’ll have to break it in, which surprisingly only takes about 100 to 200 rounds. I was genuinely shocked to be grouping within 1″ at 30 yards that quickly, but this one really just didn’t take very long to settle out.

I was shooting with the Crossman premium dome shaped 14.3 gr pellets?primarily. I tried a few others, and they were ok, but these pellets were the ones that I was getting results from that I could be happy with, so stick with the brand name pellets. You’ll be able to shoot other ones, but not as well. 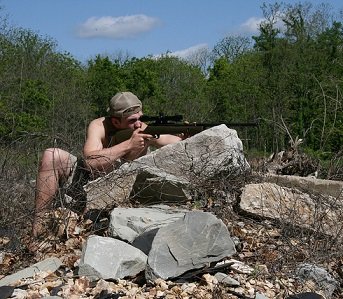 The scope, unfortunately, was less impressive. The rings were nice and solid, but the scope itself was blurry. I was able to fix it, but I really shouldn’t have had to right out of the box. Once I got it working it was serviceable, but you’re going to want a better scope in order to get the most out of the rifle.

The trigger was a little strange and a little stiff, but not horrible and much better than it could have been. One of the few complaints I have heard about this gun is that some people have had the trigger literally fall apart on them, so I’d prefer a little stiff to that. It also feels strange, but I can’t put my finger on what’s wrong with this trigger. The thing works, but I can’t say I like it.

This is a really solid gun, and you can tell as soon as you pick it up. It’s not too heavy, not difficult to cock, and breaks in very quickly to give you excellent accuracy in both near and far distance. Perhaps most important is that it seems like it will last and continues to fire perfectly even after extended use in a session. It generally sells for well under $200.

When you first get it, you’re going to need to clean the hell out of the thing. Not horrible, but something you’re going to have to do to get the best shot. The scope that it comes with is pretty weak, so factor in getting a new one to your price. See my post on some of the best air rifle scopes here for some recommendations on a better scope. In some cases, the trigger assembly just falls apart, or it’s a little stiff.

Coming back to where we were at the beginning of this review, this is a really good gun. It needs a new scope and possibly a new trigger. But those seem like small investments to make in something that works well and keeps working well, especially since it has the best break in time I have seen on a .22. ?If you want something a little less powerful for hunting birds or the like, you might even check out the .177 caliber Crosman Nitro Venom. Otherwise, this one will serve you well.

$9.19
Added to wishlistRemoved from wishlist 1

$549.99
Added to wishlistRemoved from wishlist 0

$13.97
Added to wishlistRemoved from wishlist 0